Today I want to introduce you to another of the authors who participated in Dead Ends, the charity anthology I put out earlier this month (available at Smashwords and Amazon).

Justin Macumber wrote the story “In The Deep Dark”. He is the author of HAYWIRE and A MINOR MAGIC. When not hard at work on his next story he hosts the popular Dead Robots’ Society podcast. He and his lovely wife live in the Dallas/Fort Worth metroplex along with their motley pack of dogs and cats that they think of as their children. Visit him online at justinmacumber.com and deadrobotssociety.com.

Why do you write/like horror? Horror, next to romance, is the genre most dependant on creating an emotional connection with the reader, and I like the idea of being that deep in a reader’s head. Yes, that’s me in the shadows sporting the Cheshire cat’s grin and giggling softly. 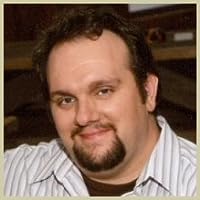 What inspired this particular story? A couple years ago there was a reality TV show called COAL about coal miners, and every episode gave me the creeps because of how dark and lonely the insides of the mines seemed. I had to work through that somehow!

What scares you? Ghosts and other evil supernatural entities. I’m not a religious person at all, with very little belief in the afterlife, yet I’m a total sucker for possession and haunting stories.

What are you working on now? A short story titled THAT OLD HELL MAGIC for another anthology. I love anthologies!

Dead Ends is available at Smashwords and Amazon
All proceeds go to the Office of Letters and Light. Please spread the word!

Stories include:
“In The Deep Dark” by Justin R. Macumber
“Morning Dew” by Edward Lorn
“Power in the Blood” by Scott Roche
“Getting Even” by Philip Carroll
“Breakers” by Paul E. Cooley
“Breakup” by J.R. Murdock
“Blister” by Jake Bible
Edited by Sue Baiman
Cover by Scott E. Pond.

I’ve been a friend of Justin Macumber’s for some time. He’s had me on the Dead Robots Society podcast a time or three and we’ve collaborated on a few projects together. All of that said in the spirit of full disclosure. As soon as I saw this new book and read the excerpt, I plunked down my money to get a copy.

Over the course of a single night, mystical fires tore through the sky and reduced most of Earth to ash. Ten years later magical fire burns again, but this time it’s in the hands of a young girl named Skylar. Exiled from her adoptive home, Skylar must now struggle through ruined lands and religious zealots who believe she’s an agent of the Devil. An even greater threat exists in the form of shadowy sorcerers from another world who covet her blood. Along her journey, she meets a motley band of outcasts who not only know the secret of what happened to Earth, but also of Skylar’s true origin. Will Skylar be able to accept this fantastical truth? But more importantly, can her powers and raging heart be tamed in time to stop those who once burned the world and now seek total domination?

I love a good post apocalyptic story, particularly when you bring the fantasy element into it. One of my favorite cartoons growing up was Thundarr the Barbarian. This is a little like that with fewer sunswords and Moks and more female sorcerers.

What we have here is a solid YA fantasy novel. There’s a bit of “coming of age” and a little “fish out of water”. There’s also an endearing bit of romance. With all of that, as someone who’s in no way the target audience for this book, I enjoyed it quite a bit.

What did I like? First and foremost there’s Skylar. The world has taken a big old dump on her and it continues to do so throughout the story. How does she react? She gets crabby, downright angry, scared, and sad. That’s how real people would react and it’s nice to see. She falls in love and at first I thought it was a little too quick and easy, but the love interest is a life boat to her. They’ve had some common experiences and they’re young, the only young people on this road they travel, so it makes sense. Perhaps the only thing about it that didn’t ring entirely true was there was little conflict in their relationship. Considering how little time they had to explore the relationship though in the midst of all of the other conflict going on, perhaps that makes sense.

That’s one of the other things I like about this novel, it moves quickly. There’s a fair amount of action and about the time the characters have time to breathe, something else happens. There’s no shortage of tension.

Finally, this is a post apocalyptic novel, so it is pretty dark. It’s nicely balanced though. We’re not talking The Road level of darkness. There are enclaves of people dealing with things badly. There are monsters lurking in pockets of wyld magic. There’s a feeling of disconnect from the world as it used to be from the younger characters and some reminiscing for the way things used to be from the adults. Justin paints a good picture of the destruction that has been wreaked. In spite of all of that, he keeps a small spark of hope burning. These people are on the way to save the world, as best they can, and you get the sense that they just might be able to pull it off.

Any down sides to this book? Not very many. If you’re looking for some kind of fully fledged magic system (and I know there are fantasy fans that want that) it’s not here. Magic is new to the world and its hard to do. In that sense, this would probably be considered “low fantasy”. The ending felt a little bit rushed to me. The characters meet the “big bad” and it gets resolved in a satisfying way, but I would have liked it to be a little harder/more complicated. In a way it reminds me of the Wizard of Oz. The story is more about the journey than about the destination. Again, not a big deal, but another chapter or two about what takes place in the other world and perhaps an epic battle scene and I would have been happier.

The most telling things is what I did when I closed the book after the final page. I handed it to my thirteen year old daughter to read. She’s a voracious reader and I know she’ll enjoy it. Finding a book that can please a crusty old man and a teenage girl is sort of the Holy Grail of YA. There are a few crusty old man words, but nothing you wouldn’t hear in a PG movie. You can’t expect a post-apocalypse, fantasy world to be all Disney-fied, and I wouldn’t want it to be.

I give this book four and a half Demon Dogs out of five!

In a week I’ll be releasing a brand new horror anthology. It will contain the following stories:

“In The Deep Dark” by Justin R. Macumber – A sinister power is overtaking men at the bottom of a West Virginia coal mine.
“Morning Dew” by Edward Lorn – A golden liquid surrounds a boy’s treehouse and its taste for human flesh is standing between the boys and safety.
“Power In The Blood” by Scott Roche – Reggie discovers that his thirst for blood can give him strength, but may cost him his soul.
“Getting Even” by Philip Carroll -The wealthy and reclusive Mr. Scott Hasbrook must pay for his sins of greed and murder.
“Breakers” by Paul E. Cooley – People known as “Breakers” remove the broken ‘cogs’ from society’s machinery as ruthlessly as possible.
“Breakup” by JR Murdock – Ruby wants to leave her boyfriend Victor, but he wants eternity or nothing.
“Blister” by Jake Bible – Going to the doctor early is a good idea, particularly if your affliction makes you a happy little psycopath.

The release date for this e-book is 7/26/13. All proceeds for the books sales will be donated to the Office of Letters and Light. If you’re interested in an ARC for review, a full size image of the cover or any more information, leave a comment or email me at scott@scottroche.com.

First, congrats to Dave Avila for winning the last giveaway. I hope he enjoys it! Now onto the current contest.

The last week has been kind of a personal clustermug (and not in a good way) causing me to miss a week in the e-book giveaway. As such I need play a little catch up. So I’ve decided to give away TWO ebooks this week. And I don’t think the universe could have asked for a more diverse match up.

Tales from the H.G.S, is a collection of six ghost stories, from the archives of the ‘Horsham Ghost Society’. James Clayton shares with us, some of his favourite tales that he has encountered over the years. From Haunted theatres, lost love to a truly personal haunting, this is just the beginning.

So pour yourself a drink, sink into your most comfortable chair, draw the curtains and lose yourself in the world of the H.G.S.

So if you like creepiness there you go. The other book is by long time friend of the blog, Justin Macumber. His book, Haywire, is one I’m currently reading and I HIGHLY recommend it.

A century ago, super-soldiers known as Titans drove alien invaders from the solar system and back to their home world. Now the Titans have returned, infected by a virus and compelled to destroy humanity. Will a scholar, her son, and the only Titan able to resist the infection find a way to stop them and save humanity from its own greatest weapon?

It more than lives up to that bit of cover copy.

So how do you get these? Merely leave a comment below and your name will be dropped into the virtual hat. Winner gets both!

I plan on giving away a book a week this year, but none of them will be my own. Why? Well, I believe in helping introduce people to new authors and nothing does that like FREE! The contests will be as simple as leaving a comment on the blog, or showing me that you’ve left a review on Amazon or Smashwords of books you’ve picked up in the past. I’ll try and change things up to keep them interesting, but by and large you won’t have to work hard.

If you’re an author and you’d like to pitch your hat into the ring, let me know. I’m not asking you to give me anything for free. I plan on buying your e-book from Amazon/Smashwords as a gift for the winner. So in addition to you getting your name out there, you’ll also get a sale for the contest. The most I can budget per week is $2.99, so if you have a book in the $.99-$2.99 price range let me know. I reserve the right to turn you down, but I will try and do so gently. I’d like to have a variety of genres represented.

If you have a free book and would like me to just get the word out I can do that, but you won’t be part of my contest. If your book is more expensive and you would like to donate a copy, that works too.

Shoot me an e-mail, a DM, or leave me a comment to enter your book.